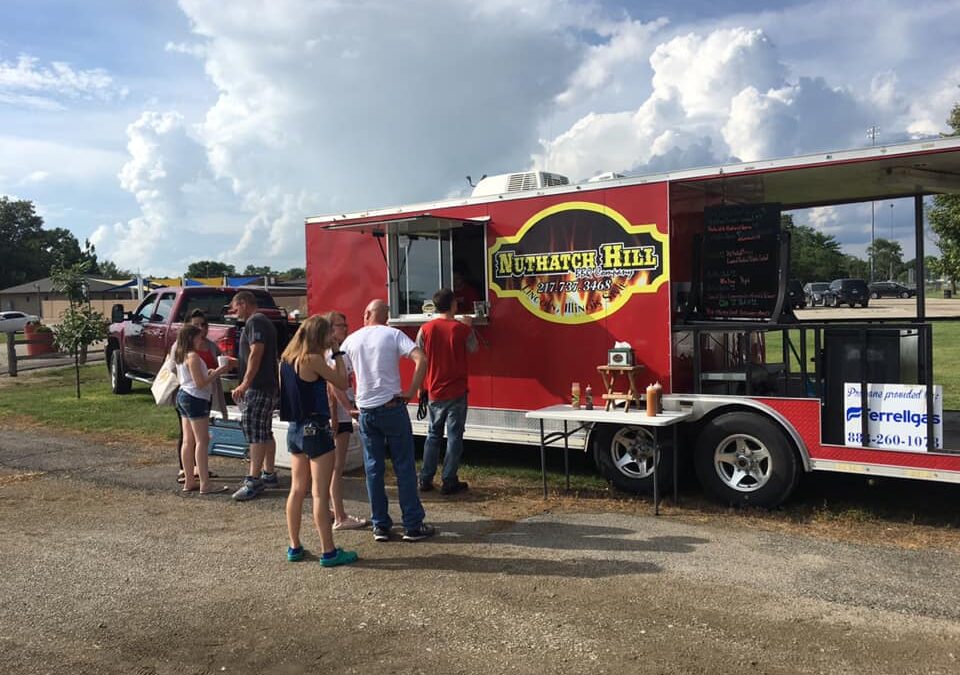 On a sunny July afternoon, Jennifer Luckhart talked to Griller’s Gold about her family’s award-winning BBQ team, Nuthatch Hill BBQ Co., and the business that’s sprung from it. (Bradney Luckhart cheerily answered the call but handed the phone to his wife so he could climb down into the pit to fix a smoker problem.)

Jennifer says, “We have been cooking on a competition level about 10 years. Most teams consist of a group of guys who are friends. We are one of a few husband-and-wife teams.” Today, the Luckharts cook with their two daughters, who are aged 10 and 11. “Since they were old enough – 4 or 5 – they’ve been watching, then helping as they got older. We just dragged them around with us everywhere!” The Luckhart girls cook competitively with the family team, and also on their own at the kids’ level. “It’s a lot of family time together, giving the kids something constructive to do. “

The people on the competition scene matter. “We have found that the BBQ world is very friendly. A majority of people are really nice and helpful. As a team that’s been around for a bit, we pass (knowledge) on to new teams. We all know it’s an art and it’s nice to talk to someone who understands.”

Nuthatch Hill has opted for a more local competition circuit in recent years. “We used to travel all over Illinois and surrounding states – Missouri, Iowa, Wisconsin, Indiana, and Kentucky. Now we do favorite competitions to keep accolades coming in and see our friends that we’ve made along the way. Competitions become a little vacation now,” says Jennifer.

Even when they’re barbecuing for fun, the Luckharts are thinking about the next competitive event. “At home, we practice for BBQ competition. It’s all down to timing.” The family uses a checklist to manage four meats – just like in competition – each of which requires different timing and attention on the smoker. Jennifer says, “We’re always looking for new flavor profiles and different ways of turning the meat in. We don’t want to get stale; we tweak a little and add something new.” Who eats all this bounty?  “We like to practice on Sunday and a lot of visitors stop by to hang out. We live out in the country on a dead-end road, so they have to have a purpose to come down here. It’s the famous ‘oh I just popped by!’ ‘Oh you have some chicken for me to try!’“ On a typical Sunday, 10 to 15 friends drop in on the Luckharts. They’re always made welcome.

What they look for in wood pellets

Great BBQ is a big picture, and wood pellets are a vital element in the process. “It’s really an art,” Jennifer says. “Your art changes with each smoker you use, your type of wood, the piece of meat.”

In the second post of this 2-part series, learn how the Nuthatch Hill family took their competition experience and built a business in sauces, seasonings and catering. 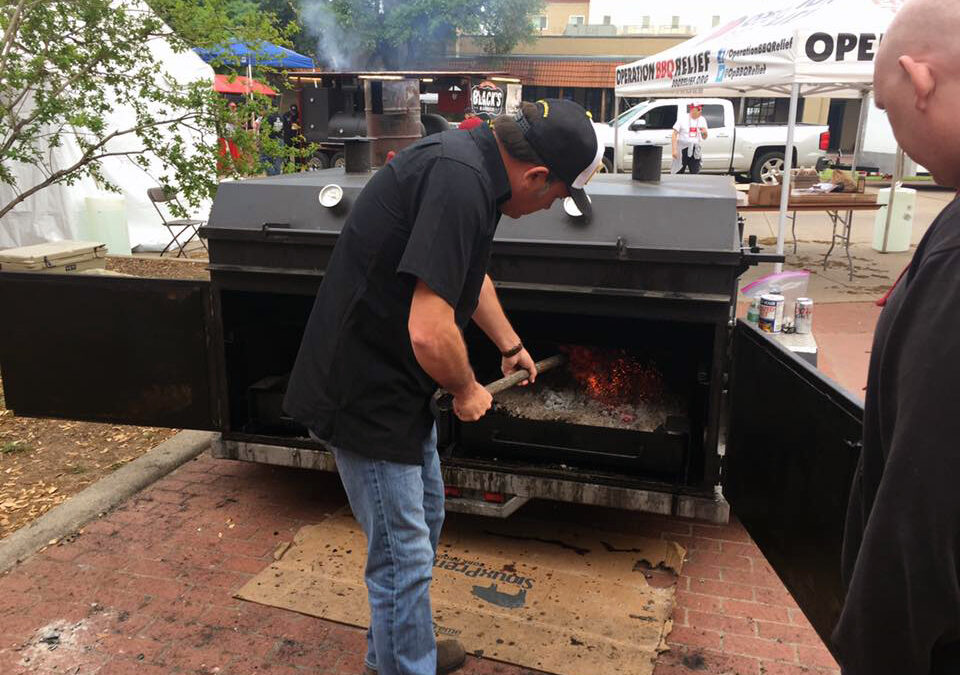 In the first post of this 2-part series, read more about the Luckharts’ feelings on competing and on enjoying winning BBQ at home. Griller’s Gold is proud to sponsor the Nuthatch Hill BBQ Co. team.

Smoke flavor requires a deft touch. Jennifer Luckhart, of the Nuthatch Hill BBQ Co. team, says, “Balance the meat, what it absorbs, with the wood. Chicken is on for a shorter amount of time since it’s a lighter meat that absorbs faster. Pork has to get a bark built on it” (a crust that results from a combination of caramelization and smoke, not too thin but not too tough and charred, either). “Each meat is different in how it absorbs smoke and how the smoke ring appears.”

In competition, smoke flavor gets judged, as does the look of the smoked meat.

“Smoke rings are very important in competition – judges like the appearance, but not intense smoke flavor that overpowers the meat. You don’t want it to taste like you’re chewing a piece of wood!”

While smoke flavor is unmistakable and irresistible, subtlety counts. ”We kind of became BBQ snobs and didn’t go out to eat for BBQ because we find much of it over-smoked.” (Jennifer notes that excess smoke flavor takes meat to a bitter place.)

Jennifer says that her husband-and-wife team appreciates distinct flavors from different blends. They like the range of flavors of the Griller’s Gold Premium BBQ Pellets line, and particularly appreciate the blends of wood types. “Fruitwoods are mixed and give nice color to  the smoke ring. You don’t have to dedicate your flavoring just one type of wood.”

Jennifer says, “We’ve had some wins and accolades that helped us open our business. We made our own BBQ sauce and seasonings because we couldn’t find exactly what we wanted. We turned it into a legit business rather than a hobby. We also do catering, and have a food truck, and sell sauces and seasonings at grocery stores.” (The Nuthatch Hill team has a stand at the 2019 Illinois State Fair, running August 8-18.)

As a competitive team, the Luckharts have placed in a number of KCBS-sanctioned competitions. Their product line evolved from their competition experience. “Nuthatch Hill BBQ Co. sauce is our competition sauce. It caramelizes nicely, it’s good for multi-meats, it mixes in well with pulled pork, or on top, it sticks nicely to ribs.“ Just in 2019, Nuthatch Hill products have won recognition in both National BBQ Assoc. (NBBQA) and National BBQ News rankings.

But the biggest win is within the Luckhart family, with two daughters, aged 10 and 11. Jennifer says, “I’m excited that our girls have embraced our hobby, and the business side, at a young age. They’ve learned cooking skills and business skills. They’ve used Nuthatch Hill BBQ Co. in 4H projects. They’re little entrepreneurs in their own right.” 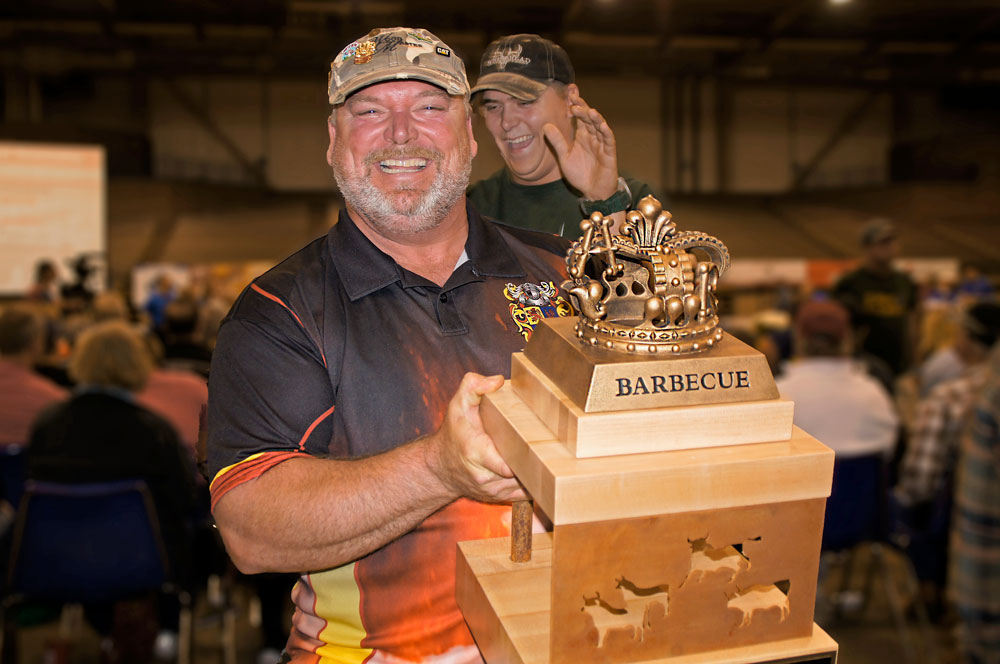 Tom McIntosh Grills Like a Champion—Because He is One

This is the first of two articles featuring Tom, a champion competitive griller sponsored in part by Griller’s Gold.

Even in the days before he imagined competing, Tom McIntosh, leader of the T-Mac Smokin’ team—sponsored by Griller’s Gold—has used wood pellets for his grilling. “I had a backyard pellet grill that I purchased in 2007. I was very familiar with cooking with pellets,” Tom said.

Tom’s competitive career began serving up food at the church picnic. “I used to have the picnic’s beer tent. We decided we had to do something about the food. We started with steak sandwiches, then chicken and ribs, then went the whole nine yards to pork shoulder and brisket.” The lucky congregation that got to enjoy all this fine food and drink is St. Pius X in Appleton, Wisconsin. Tom and his family no longer live in that community. He jokingly says “We had a hard time getting people to take over the picnic so we had to move!”

“In 2010, somebody said I should try one of these competitions. I hadn’t even seen any BBQ TV shows.” Tom entered a non-sanctioned competition in Green Bay that worked by KCBS rules. He won Reserve Grand Champion. “I’ve been competing seriously since 2012.”

“The T-Mac Smokin’ team has competed in about every state in the Midwest—Kansas, Minnesota, Michigan, Iowa, Wisconsin, Illinois, Indiana, Missouri, Tennessee, Arkansas, Oklahoma. And up to Ontario, Canada, and down to Puerto Rico, twice—we won it the first time,” Tom said.

One of the best memories Tom has is from early competitive days, in 2013. “Our whole family went to the 2013 American Royal Invitational in Kansas City, Missouri,” Tom said. “Two hundred competitors from the larger Open event were invited. We won Reserve Grand Champion and got a perfect score for first place on brisket–kind of an amazing accomplishment.”

The successes keep coming. 2018 wins include:

Nowadays, the team consists of just Tom and his wife, Becky. They like to win, but they love spending time together one weekend after another. And they enjoy being a part of the lively BBQ competition community. “Meeting the people we’ve met has been an awesome journey.“

Find Griller’s Gold near you to start grilling like a champion. 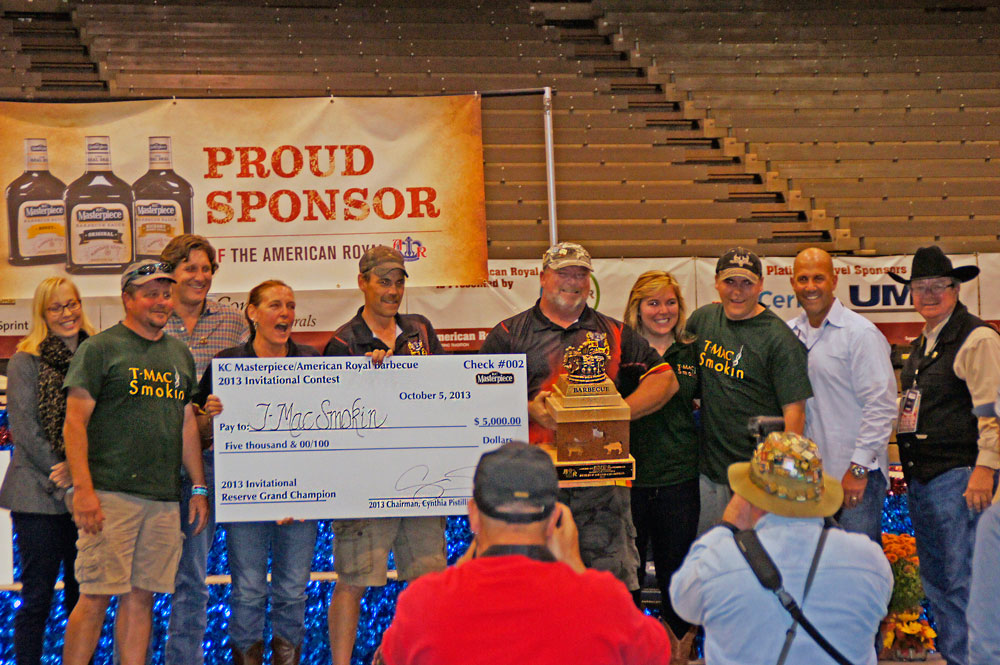 Tom grills at home, all the time. But it’s a different, much more relaxed and basic approach than  grilling. He doesn’t experiment with competition recipes when he’s in his own backyard. Tom said, “I personally struggle with doing the whole practice-cook thing. The time and attention at hard to parallel at home. I might try some different sauces, but I don’t go to the same depth with experimenting. I’m too distracted thinking about doing something around the yard. Once I get to , I enjoy being focused, away from distraction.”

Of course, Tom bears in mind what he knows from competition when he’s grilling at home.

Why a champion chooses Griller’s Gold

“I like the fact that this pellet is made in northern Wisconsin, a local product from a local team. I’ve got a hunting cabin right outside Ladysmith (where Griller’s Gold is produced),” Tom said.

Tom has used Griller’s Gold this past year, and liked his results.“The flavor is good. I’ve always felt Griller’s Gold is a clean pellet,” Tom said. He typically uses Hickory and Competition Blend—Hickory for ribs,  Competition Blend for chicken and sides. “I’ve seen non-premium pellets that leave a lot of ash in the burn pot; they’re not so clean.” Tom believes many pellets use softer wood with ‘wood flavor enhancer.’ He knows Griller’s Gold uses only 100% natural wood with no chemical additives.

At home, at the church picnic, and on the competition circuit, the same motivation ultimately drives Tom and Becky. ”We cook because we love to see people enjoy the food we make. We focus on good food that people will enjoy.” Tom’s advice: “Cook with love. Stay true to that.” 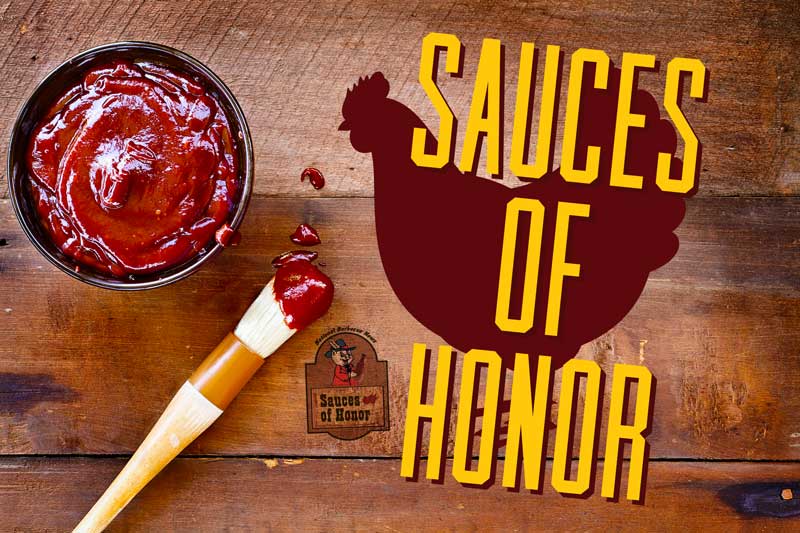 In the publication’s 7th year of awarding Sauces of Honor for BBQ excellence from Alabama to Alaska, National Barbecue News recognized these labels as the top 10 sauces for chicken. As always, the competition is open to both commercial producers and enthusiastic amateurs, including caterers, restaurants, competitive teams and farmer’s market vendors. Read about them – and look for these very special sauces when you’re in the winner’s neck of the woods. Save some room for the magazine’s list of winning beef sauces, coming later this grilling season.

AND THE WINNERS ARE… 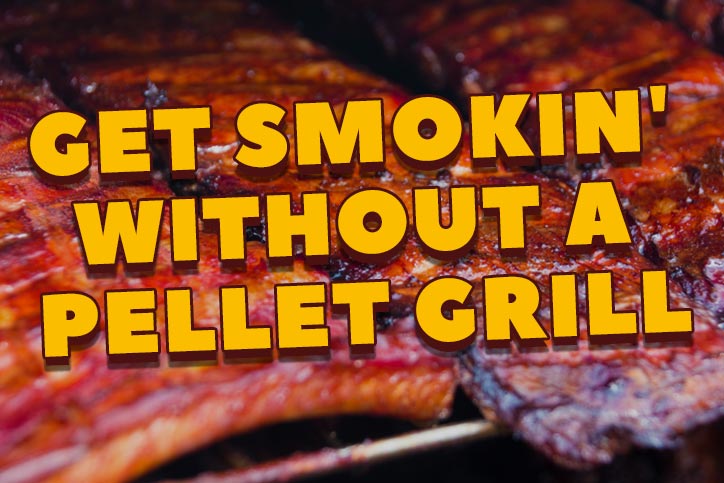 Get Smokin’ Without a Pellet Grill

If the idea of natural wood flavor and smoky goodness gets your taste buds all excited, but you don’t have the latest and greatest pellet grill gear in your backyard yet, there’s no need to despair. Here’s the good news: you can buy accessories to use wood pellets on the gas or charcoal grill you already own. 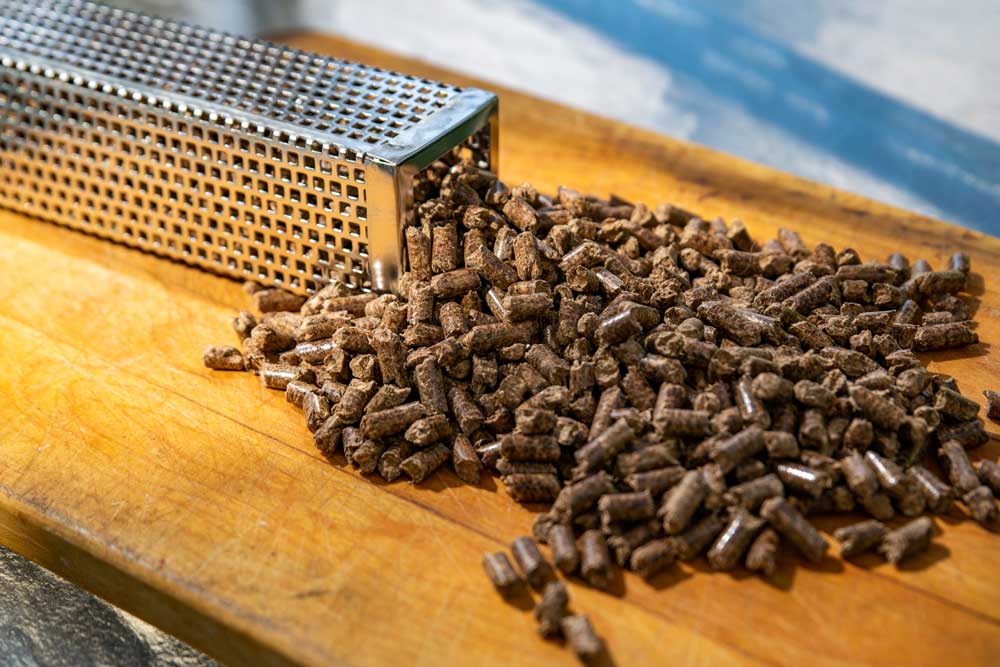 They’re made of metal so they can take the heat. They’re also easy to use! Just fill with a few BBQ pellets, place onto your grill grates, and be amazed at the added flavor your bbq acquires. Because smoker tubes and boxes are simpler devices, they’re not nearly as versatile as a fully engineered, dedicated BBQ pellet machine. But for the same reason, you’ll pay a whole lot less for smoker boxes and tubes.

Ask your local hardware retailer about smoker tubes and boxes or browse Amazon. 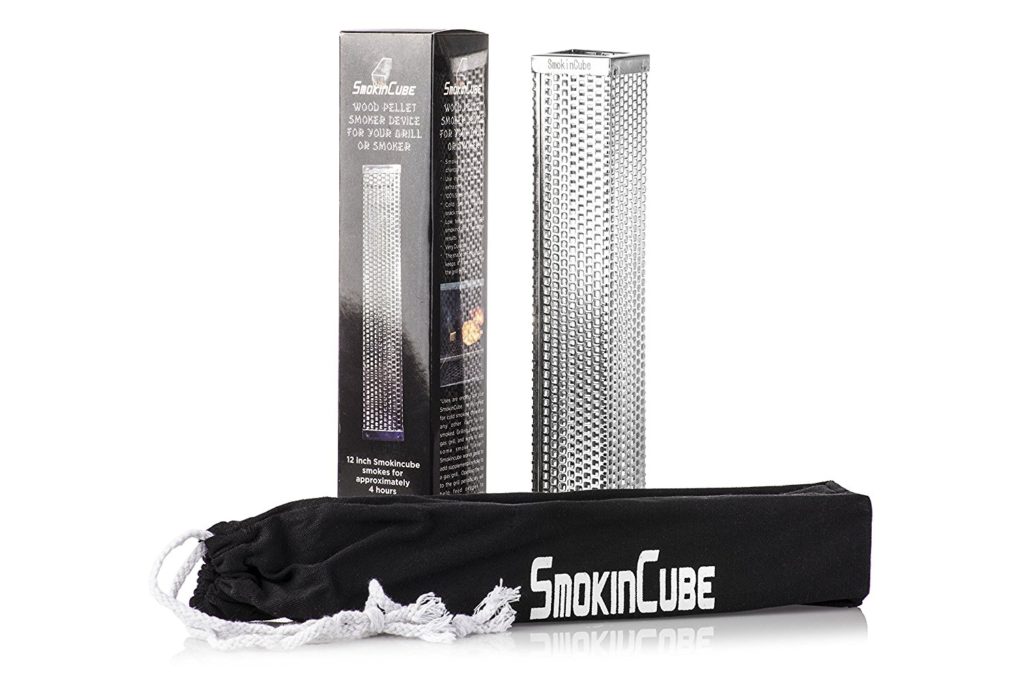 The SmokinCube is one great example of the bountiful selection you can find online. These accessories can kick off a long and beautiful relationship with pellet grilling. We hope you enjoy the journey. (We’re pretty sure you will.)

Now that you know how to get great smoky flavors, what are you going to do with them?