Bacon on the Grill! 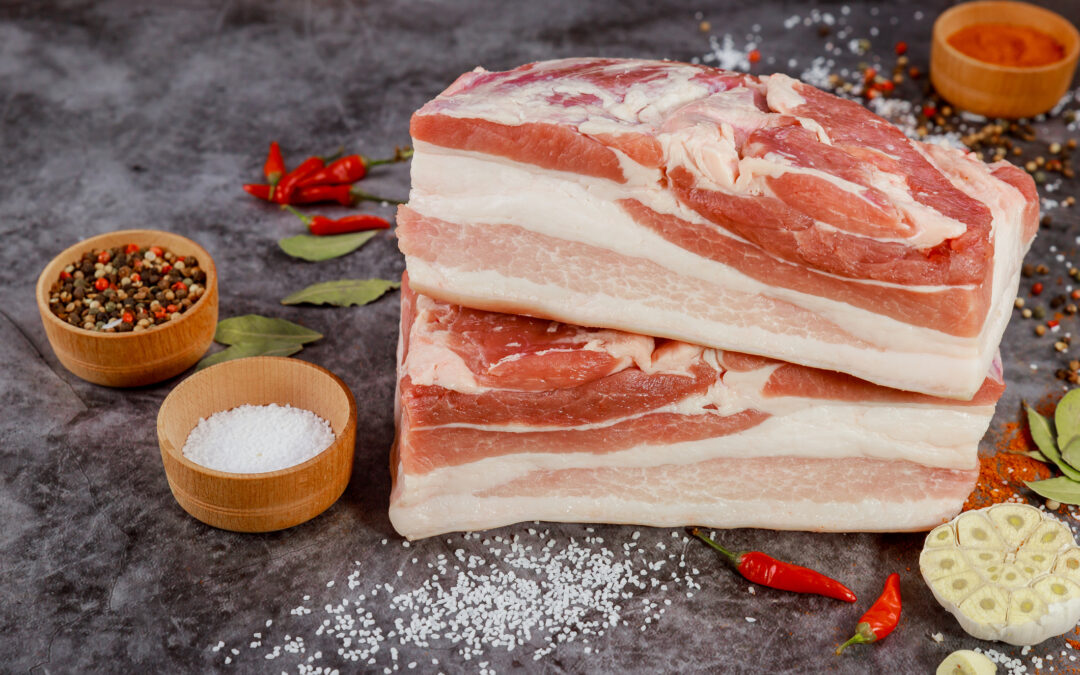 Have we said that enough?

Ok, now we got that out of our system, today’s topic is … guess what?  Bacon!

We’re going to cover a few items all devoted to that food that EVERYONE loves.

Seriously, if you don’t love bacon, we don’t know you!  In this post, we’re going to show you how to cure and smoke your own bacon, and then share with you several of our bacon-starring recipes. And all of this is fired up and designed to be cooked on a pellet grill fueled with Griller’s Gold Hardwood BBQ Pellets.  Let’s get to the BACON!

The first time you make this you will wonder what took you so long to try it, as it is ridiculously simple and the results are beyond spectacular. The hardest part about this is buying the pork belly to make it from. Seriously.

So, about that pork belly!  Bacon comes from the “belly” of the pig, and it’s exactly that – it’s the ab muscles of the pig, although most pigs we know don’t have six packs! That said, in the diagram below, where it says “bacon” is where the fun lies.  Now that diagram is a misnomer, as it is actually the pork belly but … anyway, we’re making bacon.

As usual, we have the best luck buying our pork belly at Costco or Sam’s Club, but you can also buy it at butcher shops, Whole Foods, and nicer grocery stores.  Your local grocery store butcher can also order it in for you.  At Costco, it usually is a piece about 7-10 lbs and between 10 and 12” wide by about 18” to  22” long.  Be sure to buy a nice slab of it in one piece, versus cut into strips.  The strips are great for making pork belly burnt ends (see our post about that!) but for making homemade bacon, buy the slabs.  From what we know about butchery, that’s actually one half of a full pork belly. The belly from Costco and Sam’s club comes without skin. If your butcher has it skin-on, ask them to remove the skin.

Sizing for Your Bacon:

So the big piece from the big box store is actually a bit unwieldy for making bacon – it’s hard to handle for curing, smoking, etc., so we like to cut it down in either halves or thirds (depending on how big the original piece is).  We try to make it so the piece is about 8” wide in one dimension to make it easy to put in bags for curing.  The nice thing is other than cutting it into a manageable size, that’s about it for knife work unless the butcher sold you a piece with the skin on.  If that’s the case, using a thin filet knife slice underneath the skin and remove it.  People like to save that for making cracklin’s!  Save and freeze the other half to make more bacon, or pork belly burnt ends or … so many possibilities!

The process to make the pork belly into bacon takes 5 to 7 days, but is really REALLY easy.  First step is cure, second step is smoke.

The cure is no more complicated than making a marinade for a steak or a brine for a bird, just takes a special product called Prague Powder #1 which is regular salt mixed with sodium nitrate. It is dyed bright pink to help make sure you don’t mistake it for regular salt. The sodium nitrate cures the meat by chemically altering it in a process somewhat similar to pickling. That helps stabilize the meat and fight bacterial growth. Prague Powder #1 is available widely at butcher shops, well equipped grocery stores and of course from Amazon. A little goes a very long way – the recommended “dose” of it is 1 tsp per 5 lbs of meat.

For our pork belly, which weighed in at 4.25 lbs after cutting to the size we wanted, needs just over ¾ tsp of Prague Powder #1 in the brine.

Mix that up well.  We like to marinate in vacuum sealed bags as they won’t leak in the fridge like a zip lock can. Other things that work well are a plastic-wrap covered glass dish, or a plastic storage container. Avoid metal because of all the salt in the brine cure.

For ours, we made a sealed vac bag about 8” longer than our piece of belly, sealed it up, and slid the belly in. Then we poured in the cure brine and using our “wet” setting on our sealer, we sealed it up.  Again, you do you – you want the meat not folded and laying flat for maximum surface exposure of the meat to the cure.

This goes into the fridge and needs to cure for a few days – the size of the belly determines the time, but an easy rule of thumb is divide your meat in pounds by 1.25 – that equals 3.5 days for our 4.25 lb piece. An extra day won’t hurt, but don’t short it.

Key tip: turn the bag over every day that it is curing. That helps make sure the meat is fully steeped in the liquid cure.

For best smoking results after you’ve hit the right amount of curing time, remove the belly from the curing bag or container and give it a rinse in the sink and then set it on a rack over a rimmed baking sheet and put it back in the fridge overnight.  This will help dry the surface into a sticky coating called a “pellicle” and that helps suck up the smoke flavor!

Start by firing your pellet grill up to its lowest setting – ours is 165F – you can also use the “smoke” or “super smoke” setting if your grill has that. Use your favorite Griller’s Gold pellet – the classic flavor is either Hickory blend or Fruitwood blend, but use your fave!

The smoking technique is interesting – you’re cold smoking – definitely not the usual “low and slow” method. Pull your belly from the fridge, rinse off any juices that landed on your baking sheet and fill that baking sheet with ice cubes. Set the rack with the belly on it, fat side up, over that and then put the whole works on your grill.  The ice cubes will last about a half hour and will help keep the meat cool while it absorbs smoke.  Here’s where having a reliable probe thermometer really helps – you’re smoking to just 155 degrees internal. Between the cure and the smoking heat, that will preserve your bacon without rendering out the fat.  Remove at 155 and put it in the fridge right away – you want it to cool quickly.

And that’s it – now you have this amazing slab of bacon.  We like to slice it into ⅛” thick slices for cooking for breakfast, sandwiches, etc. You can also dice it for smoked pork lardons, thick slices for pancetta, big chunks for flavoring beans, soups, stews, etc.

It will keep in the fridge for about 3 weeks, and will be good for at least 3 months in the freezer.  We like to slice it all into ⅛” strips, then freeze in vacuum bags in 1 pound packages, which is what we tend to use in about a week.

And here’s some fun, quick ways to use your bounty of THE BEST BACON YOU’LL EVER EAT!

Bacon on the Grill:

Your pellet grill is a great way to make slices of bacon.  Preheat your grill to 375, put the slices directly on the grill, turning once in about 4 or 5 minutes, done in about 9 or 10.  Note if you do this – line the heat deflector plate with foil, and then throw that away after the cook and scrape any accumulated fat out of the fat drip area on your grill to avoid future grease fires.

Buy big, nice sea scallops and then wrap each with a slice of your marvelous homemade bacon, securing with a toothpick.  Grill at 425 degrees, turning frequently until the scallop is done and the bacon is cooked, about 10 minutes.

Buy nicely-sized and shaped filet mignons and wrap them with a slice or two of your homemade bacon.  We like to do these Reverse-sear style to medium rare.  See our article on mastering reverse searing!

Oh yeah, these are good!  Buy thicker (about ½” thick at bottom) asparagus and wrap in a spiral with your bacon. Grill until the bacon is cooked, turning frequently.

Take your favorite mac and cheese recipe and kick it up a bunch of notches by cooking up a bunch of your homemade bacon and adding it to your recipe. Best when added to the sauce as you’re cooking it, then mix the bacon spiked sauce up with the noodles and scatter more over the top when baking it. OR, if you’re doing “the blue box” just fry up a few strips and crumble it in once you’ve mixed yours up!