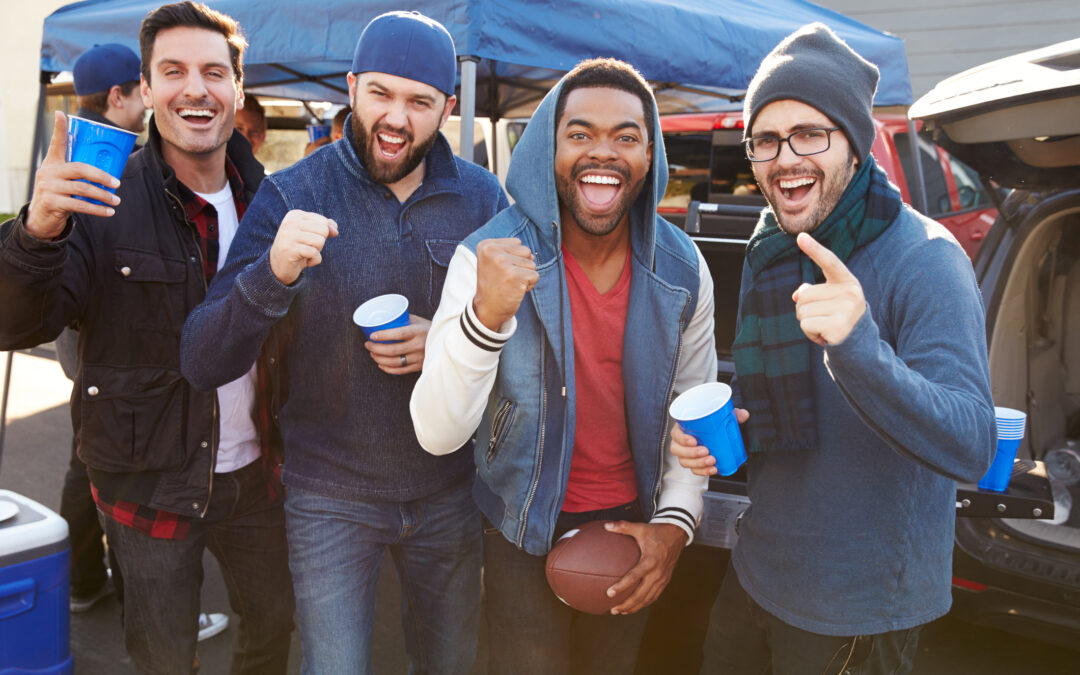 What’s more fun in the fall than to pack up the car with your tailgate setup, put on your team colors, and head to the big stadium for game day?  Not much!

Nothing goes with tailgating better than grilling, so here are some ideas to up your tailgating fare using your pellet-fueled grill at home to prepare stuff for the game!

So, here’s an assumption. We know that there are some pellet-fueled portable grills out there, and good for you if that’s your setup. You can shift all of these ideas to make at the game versus make at home.  But we’re assuming you have a nice big pellet-fueled grill for home and a portable gas or charcoal grill to pack for the game. Each of these recipe ideas are designed to be made at home on your Griller’s Gold Hardwood pellet-fueled grill and then reheated on your small grill at the game.

The gang at Griller’s Gold are PRO tailgaters. We’ve been going to college and NFL games for years and we have our game down. Our first rule is “No hot dogs!”  Nothing wrong with a little dog, burger, or brat tailgate, but we always go for the “oh, I want what they’re making” factor when we bring our tailgate game.

Our tailgate crew makes a plan for each game. It lays out the main items we’re making, perhaps some special drink items, and then we fill in around the edges.  We typically will have 2 or 3 appetizer items, then a big main or two.  But we plan this all well in advance and make most everything at home. That way, at the game, it’s just a fast reheat on a hot portable grill and we’re eating.

For reheating all of these, it’s best to set your grill up (if you can) for indirect heating. If you are using charcoal, push the charcoal to one side to make a hot zone and a cooler zone. On a portable gas grill, if you have two burners, shut one side off. If you’re on a small charcoal grill or a single burner gas, keep the heat moderate by building a smaller fire, or turning the burner down a bit. Then make sure to keep turning/stirring the food to avoid burning it.

You want to come out of the gate strong, with something bold, tasty, and well … filled with bacon and cheese!  Fortunately, there’s this amazing thing called a “Bacon Explosion!”

It goes by a few other names out there, but the gist of it is simple – it’s bacon, cheese, and if you want spice, chopped pickled jalapenos, stuffed into a log of sausage that’s rolled in a bacon lattice.  For a recipe on how to construct one of these, this is a good link:  http://www.bbqaddicts.com/recipes/pork/bacon-explosion/.

Our recipe diverges from theirs in that we add a generous amount of shredded cheddar and don’t put the barbecue sauce in.  But, the construction techniques are solid here.  To cook a bacon explosion, fire your pellet grill up (we like to use Griller’s Gold Smoke Shack Blend for this one!) to a temperature of 350F degrees. Cook it until it is 165F with a thermometer in the middle.  On game day, all you’re going to do is reheat it on your grill until it’s hot all the way through.  Keep it moving and turning though as you don’t want to burn off all the bacon.

Another great game day recipe that is easy to make ahead is good ‘ol wings. Make these ahead by seasoning them with your favorite barbecue rub, then grilling them on your pellet grill at 425F until crisp and done.

What we do for game day is hold off saucing them until we’ve reheated them on our tailgate grill, then sauce them with our favorite commercial sauces. We have great homemade sauces too, but the commercial stuff is handy for game day.

Want to raise the ‘ol “chip and dip” game? How about SMOKED QUESO?  This recipe has been all the rage around the grilling and pellet grill barbecue social media forums for the last several years and for good reason – it’s amazing!

Creamy cheese base with peppers, onions, chorizo sausage, and more mixed in.  So good – and way easy.  Use our recipe from the Smoky Snacks blog post from a few months ago.  Again, make this ahead at home and on game day, put it on the grill to reheat, stirring every couple of minutes to make sure you’re not burning it on the bottom, then serve with a generous supply of tortilla chips.

Finally, how about some homemade, pellet grill-smoked, bacon-wrapped Jalapeno poppers? Jalapeno, stuffed with cheese, wrapped with bacon … OMG so amazing and so easy.  Just like the other apps here, make ahead on your pellet grill at home to get that wood-grilled flavor, then reheat on game day – keep them moving so you’re not burning the bacon if you don’t have an indirect heat setup.

As we said, with our tailgating crew we go for the “I want what they’re having” effect!  Nothing wrong with a burger or a bratwurst at a tailgate, but … we always feel that anything worth doing is worth overdoing!

Therefore, here are three great ideas that are both “hand food” and also fantastically tasty, and deliver those all-important envious glances from nearby tailgaters. Do what we do – make a ton and share with all the tailgaters who couldn’t get outside the hot dog box.

Yeah, we go there! A rack of pork is a big bone-in pork loin roast with the ribs on it. It’s used most frequently in a crown roast of pork, but we like cooking it straight (not curled up) and then slicing apart the individual rib chops so you wind up with a pork chop on a stick!

Have your butcher take the chine off it (that’s where the ribs connect to the spine), which makes a nicer presentation, and makes it easier to cut the individual chops. We like to season ours with salt, pepper, garlic powder, onion powder, and paprika, then we slow-grill it on our pellet grill (we like Griller’s Gold Fruitwood Blend, or Cherry for this recipe) at 250 degrees until 135 degrees internal.  Yup, that’s a touch under done for pork, as you’ll then finish it on the grill at the game.  The slow grill gives it lots of wonderful wood-grilled flavor, and if you want you can finish it with some barbecue sauce at the game.  Then slice into individual chops and serve, using the bone as the stick!

Since we’re on the subject of meat on bones, there’s nothing better than lamb racks, cooked medium, and sliced up like little three-bite lamb lollipops!

We buy ours at Costco or Sam’s Club, and season them with salt, pepper, garlic powder, and a bit of oregano. Then we slow grill them at 250F on our pellet grill (Griller’s Gold Competition Blend is our favorite here) at home until just 125 degrees internal.

Then at the game, back on the grill, and we drizzle them with lemon juice.  Keep an eye on them as lamb fat likes to ignite!  Grill them until just nicely browned and about 130 degrees internal. Slice up and enjoy!

Beef tenderloin, while pricy, is just so wonderful, and is easy to grill.  We buy a whole beef tenderloin at either Costco or Sam’s Club.

We slice it into 1 ½”  thick slices and quarter those slices to make 1-2 ounce chunks. Then thread about 3 of those on each skewer with a thick slice of sweet onion in between. Season them with just salt, pepper, and garlic powder, and slow grill them on the pellet grill (Competition Blend again here!) at 225F until just barely rare – about 115 degrees internal. That leaves room for you to then sear and heat them at the game.

At the game, these actually love a bit of direct heat to put a nice crust on them. Just be mindful that they are already nearly perfectly medium rare so you don’t want to overcook them.   Nothing better than handing a hungry tailgater a stick of perfectly-cooked beef tenderloin!

The Drinks and Other Fill In items

With such great fare, you’ll want to consider having a few additional tasty items plus some great drinks.  On the drinks front, obviously, consider what your audience likes, but we like to do a theme drink, such as a bourbon old fashioned, or martinis that fit the occasion, as well as having good craft beers and of course lots of water and soft drinks available.

For additional fill-in food, consider some salads like a good cole slaw, a tasty potato salad, or even a green salad. We also like to have lots of small crunchy snacks like the ones featured in the Smokey Snacks blog post from a few months back!

Get to the game and have a ball!