Inflation Hacks – How to Rock BBQ on a Budget! 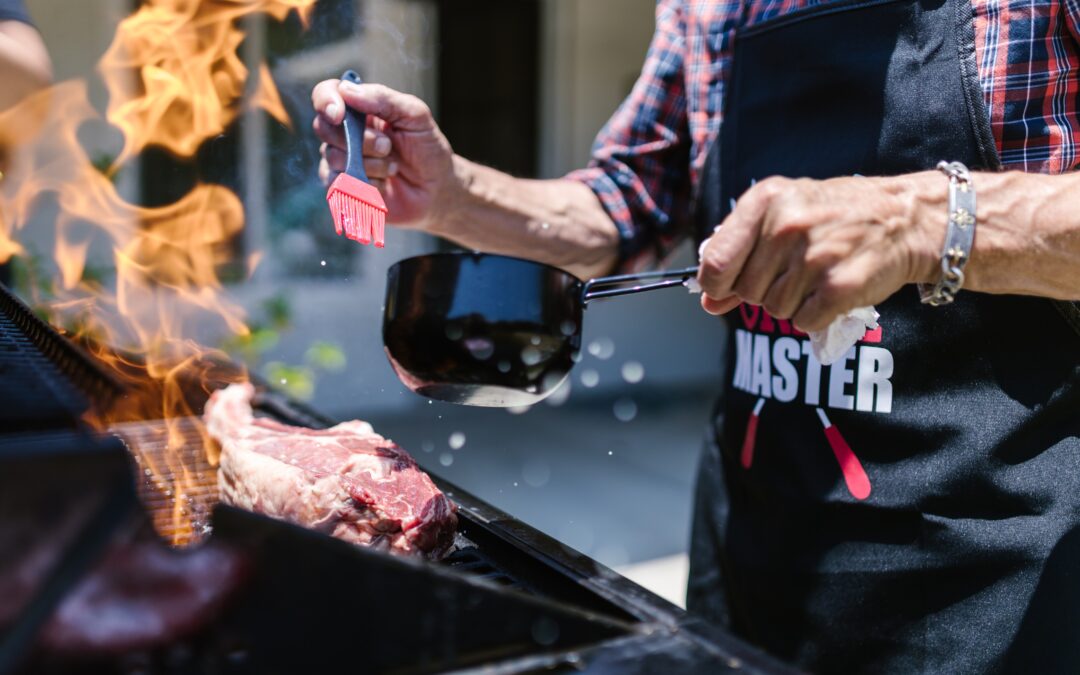 Let’s face it – things are expensive right now. Everything from the cost of toothpaste to gas has gone up. Unfortunately, groceries and especially less-sold grocery items like the BBQ meat cuts we know and love, have gone right up with them.

If tight budgets have you down, then you’re in the right place! We’re going to show you some simple ideas to make amazing grilled treats on a budget. All fueled of course, by Griller’s Gold Premium Hardwood BBQ pellets!

Enjoying the grill on a budget just involves making the same things you love with some twists. In this edition, we’ll do three things that “mimic” three faves, only on a budget.

We are replacing a big thick Ribeye, Wings, and Baby Back Ribs with substitutes that are just as tasty and more importantly, much less expensive than the originals.

Of all the foods to have gone sky-high, beef is probably the worst one. It’s a combo of poor demand during the pandemic that caused producers to scale back operations and then when demand returned, not being able to scale back up fast enough. Fortunately, there are signs that this is improving, but beef prices are still at a record high.

So, you’ve got a hankering for a big thick ribeye, but that cost is a way off? For about 40% of the price of a bone-in rib roast, you can get … a chuck roast! The ribeye’s tastier cousin.

I know, you’re saying “hey wait a minute … chucks can be tough as nails, they are for braising not grilling.”  But we say “nay nay! Don’t knock it until you try it.” The trick to tenderness comes in three ways:

Now, this all said, a chuck’s “chew” will be more like a New York strip than a filet, so just be ready for that.

Buy and Trim on a budget:

Buy the thickest chuck roast you can find – ideal thickness is 1 ½” to more than 2” thick. Look for chucks that have even marbling and ideally a minimum of hard ridges of gristle. When you get it home, trim off any hard exterior gristle lines, any silverskin, and hard bits of fat on the outside. Leave what is between the muscle sections alone until after cooking.

As you’ve probably learned, great juiciness and tenderness can come from brining. (This is typically done to turkeys and chickens.) As the salt is absorbed into the meat, it “denatures” or untangles the tangled-up protein strands in the meat.

The dry brine technique is simple.

Take the meat out of the package, put it on a plate or a pan, ideally with a rack under the meat to give it some air space, and sprinkle it generously with kosher salt. Then you leave it unwrapped in the fridge overnight.  That’s it.

You’ll find that about an hour after the salt goes on, it will have all dissolved. As you check on it, you’ll see that some moisture has come to the surface of the meat, then disappears again.  That’s the brining process at work.

So the day before cooking, get the salt on it and put it in the fridge. About 2 hours before cooking, take it out, give a rinse in the sink to wash off any residual brine and you’re ready for the next step!

Now, what if you didn’t plan ahead? No worries – even a 4-hour dry brine at room temp has a good effect.

Key thing at this step – examine the meat and get to know where the muscle divisions are before you cook it. This will help you with the carving later.  In this photo, you can see natural divisions between muscles marked with red lines. We’ll split it along those lines after cooking and then slice off any gristle or sinew, leaving just delicious tender meat.

For the cooking technique, we’re going to use reverse searing. That’s the technique where you cook low and slow until just before your meat is the desired doneness, then, you rest it, and then sear it just before serving.

This “budget” style of steak will be so good it will make you think you’re royalty! Hint: Don’t share your secret with your guests!

Due to the popularity of chicken wings in restaurants, and the labor-intensive process to cut them, wings are inherently much more expensive than good ‘ol chicken thighs.

Chicken thighs are thicker, meatier, and well, most would say, even tastier than the ‘ol chicken wing.  Here’s a quick and easy technique to make tasty, crisp-skinned chicken thighs ready to toss with your favorite wing sauce:

Simple: bone-in, skin-on chicken thighs. Ideally don’t get the ones with the back bone and  meat attached (and if you do, look up on YouTube on how to remove that, then save them to make chicken soup).

We like to rinse off the chicken after it’s out of the package then spread it on a baking rack to air dry a bit.   This next step will be the kicker step: take all the thighs and dump them into a big mixing bowl, add a couple of tablespoons of baking powder (yes we said that!) sprinkled evenly over them.

No low and slow here, friends, heat is what you want. We like to preheat to 425 degrees for at least 20 minutes, ideally 30 minutes. For Griller’s Gold BBQ pellets, really anything works great for this – we like either Charcoal Blend or Competition Blend for chicken parts on the grill. If you’re grilling over charcoal or gas, well, get the grill good and hot, but ready to cook indirect, which means charcoal on one side, and for gas, one burner shut down.

Put the thighs on the grill, skin side up to start, then turn them every 10 minutes until done – which should take about 30-40 minutes at 425.

Done is 185F with an instant-read thermometer pushed down to the bone in the center of the thickest piece you have on the grill.

We love to sauce them three different ways:

Pork Shoulders and cuts like Pork Shoulder Steaks are a great way to have that satisfying pork rib flavor on a budget.  “Boston Butt” roasts or Pork Shoulders (they are the same … yeah don’t ask why a shoulder is also a “butt”) come from the shoulder of the pig and because they are a worked muscle they are super flavorful.  Treat them like you’re cooking ribs and you may never go back to baby backs!

We like to buy whole pork shoulder roasts, either bone-in or boneless for this. If you buy bone-in, remove the bone which is a blade-like thing that is usually exposed on one edge.

Just follow it down with a boning knife to cut it free. You can also buy pork shoulder steaks which are steaks crosscut from the shoulder cut. The problem is they are usually cut too thinly.  If you’re working with a butcher or have a good grocery store meat counter they can cut them for you. The ideal thickness is at least 1” thick.

Your goal is strips of meat, not unlike “chicken fingers”. They should be about 1” thick and 2” wide and as long as you can cut them from the roast.  We like to cut 1” thick slabs and then cut those into 2” wide strips. Cut off any surface fat on any of them.

A good “rib rub” is what you want here – use your favorite!

For extra flavor and moisture, first toss the “ribs” with about ½ cup of yellow prepared mustard until evenly coated.  Then throw on a generous amount of rub and toss to coat evenly.

Preheat your pellet grill with Griller’s Gold BBQ pellets to 250 degrees for at least 20 minutes.  For this recipe, we prefer Griller’s Gold Hickory, Applewood, or Competition Blend pellets.

Lay the strips crosswise across the grill grate.  Turn them every 30 minutes. They are done when they are cooked through and very tender. The internal temp should be about 185F degrees or more – up to 205F. Cooking can take up to 3 hours.

So … they aren’t the satisfying “meat on a bone” like baby backs. But gotta say these are super tasty and if you have anyone in your family who is “bone squeamish”. This is also an excellent way to get the great taste of ribs without bones.  They are also great party “finger food” as well, with no bone mess to deal with.

Grill on friends! Until next time.